I caught this flick on cable one night a couple years ago while flipping through the channels, and it quickly became one of my favorite films. What caught my attention was the heart of the story, for it is one that, regardless of all the oddities, camera angles, and unlikelihood of certain events actually happening, it is a story of love and speaks to what we are all trying to find.

After spending time in prison for a crime he didn’t commit, on a cold, snowy day, Billy Brown(Vincent Gallo) is released from prison and sets out to visit his parents. Billy is a shattered soul, lonely, angry at the world, and full of self-hatred. Throughout the film, you come to see that Billy has had a somewhat troubled childhood raised by less than loving parents who’ve barely showed a passing interest in his life.

While in prison, he led his parents to believe that he had simply moved away and was living a very successful life somewhere. So, when Billy gets out of prison and doesn’t have anywhere to go, he tells his parents that he’s flown in town to pay them a visit. The only thing is that, now, he must manifest this fabricated life that he has lied to his parents about which includes a beautiful wife at his side.

Soon enough, Billy comes across such a women, named Layla(Christina Ricci). He kidnaps her, changes her name, and forces her to drive him to his parent’s house to play the role of his wife.

Throughout this pitiful and somewhat comical adventure, Layla comes to realize that her captor is rather harmless and that his bark is much worst then his bite. She is able to see the pain festering inside of him, the bitter loneliness that drives his erratic and irrational behavior. She tries to show him kindness and compassion, which explains why, after they leave the home of Billy’s parent’s, she opts to stay with him and tries to help him figure out what to do next.

By the way, Billy’s parents wind up liking Layla more than they do Billy.

Always getting the bad end of the stick, Billy doesn’t know how to take Layla’s kindness and continuously pushes her away whenever she tries too get close to him. With the parents visited and out of the way, Billy has one more task to complete. It is something that he’s been waiting to do the entire time he sat wasting away in prison. Billy has a score to settle and at a critical moment, when he is about to go down a destructive path that he could never return from, he realizes that, in Layla, he has finally found someone that loves him, unconditionally, for who he is. 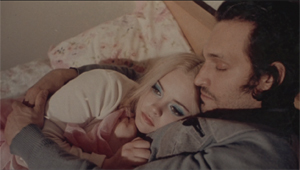 The film is short, sweet, and to the point. I really enjoyed the music as well. Especially the ending song, “Sweetness” by Yes. For me, this is one of those charming little films that I can watch over and over until my eyes bleed, lol. This story in particular is one of the reasons why I want to make films.

Check it out if you ever get the chance. It’s great!

QUICK QUESTION: What film have you come across, totally by accident, that is now one of your all time favorites?