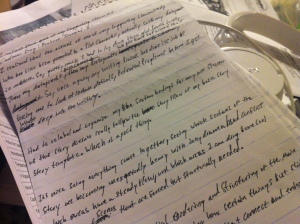 Once again, my writing process has done it’s job of forcing me to look at certain details, potential problems before I get waist deep in the writing.

8/22/14
Had to relabel and organize my act structure as this story doesn’t really follow the usual flow of my basic story structure template, which is a good thing.

It’s nice seeing everything come together. Seeing which sections of the story are becoming unexpectedly heavy with juicy drama and conflict, which areas have a steady flow, and which areas I can drop some cool connective scenes in that aren’t forced, but structurally needed.

8/25/18
Finished the initial ordering and structuring of the main and sub plot points. It’s amazing how certain things just slid into place, between separate plot points, that connect and enhance each other nicely.

8/26/14
Structured the next 4 chapters. Chapters one and two have already been written and critiqued by my writing group. Focusing on chapter three now.

8/27/14
3 out of 4 scene summaries for Chapter 3 done. Feeling good about how this chapter is shaping up, though nervous about writing it, ha!