I came home from work one Saturday and after greeting my wife and male heir, I noticed something on TV.

My usual question to the wife, “What are you watching?”

“I don’t know. Something with Jamie Lee Curtis playing some crazy chick. It just came on.”

Okay, so my interest peaked at, “Jamie Lee Curtis playing some crazy chick.” Why? Because the only things that I’ve ever seen/liked her in are Halloween 1 & 2, True Lies, and MAYBE Freaky Friday, but the main draw was her supposedly playing a “crazy chick”. I like crazy chicks, when they’re played well that is, ie: Jennifer Jason Leigh in Single White Female. That’s my girl!

So, I sit down to give the film a try and my first impression is, “This is the darkest movie EVER!”. I’m not talking about mood or tone, I’m talking about the actual lighting. It seemed like every interior scene, be it day or night, was dim, nearly void of light, with stretched shadows all over the place. It was comical. I almost couldn’t take the movie seriously because of it.

Jude (Jamie Lee Curtis) is somewhat of a flighty rich girl, married to Robert(Peter Gallagher), and mother of three kids: Kes, Micheal, and Ben. Jude has the habit of flat-leaving her family on a whim for days, weeks, months. This particular time, she’s been gone for three years. One day she comes back, “Honey, I’m home!”, but to her dismay, Robert and the boys have moved on with their lives.

There’s a new woman in the picture: Callie. 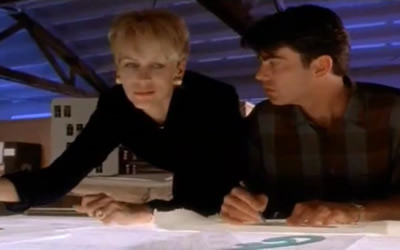 Jude, being Jude(mentally unstable), does not like this at all and proceeds to try to a)destroy Robert’s relationship with Callie, b)ruin Callie’s life, and c)use her sons as pawn in her game of manipulation.

There is a scene that instantly brings me to Tyler Durden/Fight Club, where Jude visits Callie at her job, and while in Callie’s office, behind closed doors, Jude beats herself up, she even cuts her own face with broken glass.

In an attempt to destroy Robert and Callie’s relationship, Jude comes close to seducing Robert, but he stays strong, and after a little lip locking, rejects her.

Now, I don’t know why exactly the film is called Mother’s Boys because Jude mainly focuses on one of her children, her eldest, Kes, as opposed to the others.

Kes is a troubled child, angry at his mother for leaving the way she did three years ago, So Jude has to work hard win him over. In that conversion to the Dark Side, the film toys with the idea of incest, which we find out is a direct link to Jude’s own childhood and her erratic behavior.

Now partners in crime, Jude and her very willing son, Kes, plot to “scare” Callie into leaving. Well, at least that what Jude has Kes believing.

Kes, using his powers of “Big Brother”, persuades his siblings to play a little game where they “detain” Callie for a specific amount of time, while unbeknownst to Kes, Jude does a little mechanic work on Callie’s car. Of course, Jude and Kes’s plans backfire which leads to Jude’s demise, which was kind of flat. It kind of…just happened. I didn’t feel any particular build up to it, and when Jude died, I felt like, “Oh…okay.”

At the end, the film hints at Kes’s fractured psyche, which may have been pushed over the edge after witnessing the death of his mother.

All in all, the film was okay. I did enjoy watching Jamie Lee Curtis play crazy, though I think I would have liked it even better if her death had been a bigger event than the casual passing that it felt like to me. In my opinion, Mother’s Boys isn’t anything to rant or write home about, but if I caught it on cable again, I wouldn’t necessarily turn the channel. I’d watch it again. So, I say check it out if you ever get the chance.