Rebecca Clare Smith is a fantastic writer from the UK. I’ve followed her blog for some time now and we’ve “chitchatted” here and there, off and on through blog posts, Twitter, and Facebook throughout that time. Back in September of this year, she released a story, Desecrated Bonds, and when I read it, I was instantly gripped by the dark, gritty prose, which often seemed poetic at times. It’s a heavy paranormal tale that I won’t spoil for you, but will highly recommend instead.

So, to congratulate Rebecca on her release, I asked if she’d endure a short interrogation and she graciously accepted the challenge. I’m sure you’ll find her as interesting as I do.

So, Rebecca, when and why did you start writing?

I didn’t start. That’s the simple truth of it. Writing is just as natural as breathing, to me, and just as important to living. I have always written. I’ve written before I could even write, if that makes sense! Various family members were made to sit down and scribe my stories whilst I dictated the vague plots that meandered dreadfully off course.

One of these was absolutely ridiculous and yet I remember it vividly (perhaps because it was so nonsensical). It was a story about a husband and wife who worked so hard one day that they slept all night and all through the next day, waking up on the next night, which is when they decided to do some gardening under the starlight.

When I was six I wrote, illustrated and bound my first paperback – by which I mean I got several pieces of A4 and stapled them into a book. It was a story about My Little Ponies (which I was crazy about at the time) and pivoted around a rescue as most of my stories did at that stage. I also put my name, age, address and our house phone number on it because I thought that would make it seem more professional and real.

I’m a sucker for dystopian fiction and urban fantasy. Most of what I write, however, is dark, whether it leans more towards dystopian or urban or not; hence the tagline on my blog, which reads ‘The personal thoughts, musings & flash fiction of an author of urban & dystopian dark fantasy’. I do like to add a small amount of science in, however. My worlds always have to have some kind of factual pieces about them and a basis in the real world.

How do you develop your stories?

Mostly, I’m hit with an idea for a start or a middle. More often than not this gets written down in a little black book I have, unless I feel the need to start typing up straight away. With Desecrated Bonds that wasn’t the case as I was given a brief. Breaking Cadence, however, was a piece from a dream and I was so overfilled with ideas that I needed to gush on paper before I could work through the rest of the story.

My preferred method for working through is blank A4 and a pencil. Then I spider diagram and jot notes until I can eventually make a sort of flow chart. Plus, there’s an Excel spread sheet or two full of character data and terms and plenty more.

What’s your favorite aspect of the writing process?

Genuinely, that would be the reading bit.

I absolutely adore hearing from readers. People who’ve been captivated by my worlds and want to read or more and those who are impassioned by something I’ve done in the novel or a particular character or excited by a cliff hanger. Those are just the best bits: knowing that you have done a good enough job to really thrill someone.

As an author, what are you saying to the world, if anything?

That’s a really good question and not something I’ve truly thought in depth about. Maybe I’m simply trying to point out that people are not always as they seem at first glance.

A lot of my characters certainly aren’t!

Tells us about Desecrated Bonds? 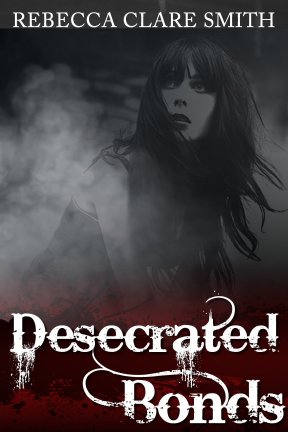 Desecrated Bonds is just what the title says – an alliance of something unholy. Now, I’ll let you figure out what that means to you.

It’s a short story about murder and its consequences for somebody whose ghosts are more than just figments of her imagination. There are lines crossed and blurred. There’s heartache. And there’s stalking. It was a lot to fit in just less than six thousand words!

What inspired the story?

The story was actually a piece for a Katarr Kanticles Press anthology that I was invited to by the lovely lady in charge. It was a complete surprise as I hadn’t published anything beforehand other than the free pieces of flash fiction on my blog and the occasional poem included in anthologies. But it was lovely to be asked.

As I mentioned, the tale involves stalking and that was the prompt for the anthology. We were told we could be as unconventional as we liked in our approach so long as there was a twist. And I guess I must have achieved that well enough because I’ve been invited to release my full length novels with KKP – two of which will be available for purchase at the beginning of the new year!

How long did it take you to write?

A few months, give or take. I’d been busy at the time so writing was crammed in between work and problems at home along with plenty of other things. So it was hard to do, but I’m so glad I did.

Who’s your favorite character in the story?

Hmm, favourites… There are really only two main characters in the story. Unfortunately, I like them equally despite the huge differences between them. Both have shortcomings and both essentially make the same passionate mistake.

What’s the message behind the story, if any?

Things are usually a lot more complicated than they may at first appear and sometimes it helps to run back over things to spot the signs you may have missed.

What do you do in your spare time?

Ha ha. I spend my spare time writing & reading, of course! The rest is snatched moments cuddled up watching movies with my other half and our two cats. Everything else is cleaning and tidying or working my day job.

What’s one of your favorite books?

I have so many I’m glad you only asked for one of them. I’d have to say No Humans Involved, which is the book that got me into Kelley Armstrong’s fantasy series. It involves a necromancer – someone who can see the dead, not unlike the main character in Desecrated Bonds. I think I maybe have a weird fascination with that particular brand of paranormal/supernatural fantasy.

What’s one of your favorite films?

That’s a hard question too. I have favourites in all genres. When Harry Met Sally because there are so many fantastic lines in it; Twelve Monkeys because it’s thought provoking time travel; 5th Element because it has a fantastic message; and then I guess either the classic Disney films Up! or Robin Hood for fun!

What’s one of your favorite songs?

Slightly easier!  You Are The Moon by The Hush Sound which is all about hidden beauty.

Gosh, I have no idea. Maybe my mum because she can be both when she wants to be.

What will be your next release?

Preying On Time, the first of my Indigo Skies series, will be the next available. Its predicted release date is January and I’m hoping we’ll hit that. And then, a couple of months later will be Breaking Cadence, another first of what will be the Survival trilogy. I’m especially excited about Breaking Cadence right now as I’ve only just finished the first draft and already started editing.

It’s so exciting knowing that two of my longer works will be out there for people to buy and read! I just hope they like Desecrated Bonds as a snapshot to my further work!

How can the readers keep up with you?

I am online in so very many different places that it’s unbelievable. I’ll give you a short list here, but there are also extra links on my blog where you can find even more social media sites to find me on as well as my author pages on various websites, such as Amazon or Smashwords.

Primarily a fantasy hound, Rebecca is an animal lover with a writing style that meanders between dystopian and urban. She lives by the seaside with her pragmatic other half and their cats in the lovely UK county of Yorkshire (where tea drinking is expected and dunking biscuits is mandatory).

Her day job is friendlier than her plotlines might have you expect and her house is far less cluttered than her head, surprisingly. Occasionally she attempts to garden or clean, but is more often found with her face buried in new writing or the writing of others.

A big fan of social media, chances are you’ll catch her on all of these sites at some point during the day:

So, swing by Rebecca’s blog and check her out, and don’t forget to snatch your copy of Desecrated Bonds. You won’t be sorry.