Here’s an excerpt from my upcoming release, Two-Sided Triangle, where you’ll be introduced to a…unique leading lady. 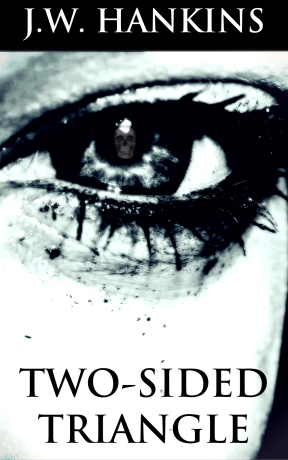 Michael will never see this coming!

That’s what Tammy banked on when she pulled up to his one story ranch house. It was late, but the soft white glow seeping through the curtains of his living room windows confirmed he was home and awake. She gripped the steering wheel and kicked her feet with glee as she smiled. This was the happiest she’d been in months. Her heart felt like it would burst.

She cut the engine to her old, boxy, burgundy Volvo, killed the headlights, and snatched up the black leatherette ring box waiting in the passenger seat. She opened the box with a toothy grin and gazed at two silver engagement rings inside.

Tammy had to promise all sorts of things to her parents to get the money for the rings. She had to reassure them she was still doing everything she was supposed to do, which mainly meant sticking to her daily routines, immediately calling them if she had any problems or began feeling bad, and keeping her grades up. This was her last year in college and they wanted her to finish strong, more for her than them. To prove to herself she could stick with something and finish it is what they claimed.

When they asked what the money was for, she told them it was a surprise, a surprise for everyone. Her getting engaged would definitely be that, especially to her soon to be fiancé, Michael. He was sweet and brilliant, but a little slow on the draw when it came to relationships. How many hints would she have to drop? How many bridal magazines would she have to casually skim through in front of him before he got it?

It was silly she knew, but a girl had to do what a girl had to do, and sometimes, if not most, that was guiding her man in the right direction. Even though the Bible says a wife should be subject to her own husband, it also says basically, a wife should be able to guide her husband back to the right path in case he strays. Michael and her getting married was the right path. So, as far as she saw it, even God was on her side.

She closed the ring box and checked her face in the rear view mirror. Piercing brown eyes flashed against high cheek bones and milky skin. She wore no makeup. Didn’t really have time to put any on, besides, she didn’t need makeup according to Michael. Her long dark hair was a little disheveled, but still, no biggie, she smoothed her hair down with her hands. Things like that didn’t matter to Michael either. He was like the perfect boyfriend.

Her pulse quickened with anticipation as she opened her car door—

Don’t do it! Fear gave her pause. You’re gonna regret it!