“You see how it bent her backwards, snapped her spine clean in half? This poor girl was lucky.” Edd pointed at the broken corpse.

Daren twisted his mouth and fought to keep his dinner in his stomach. The stench was unlike anything he ever smelled before. “How is that lucky?”

“Man, let me tell you. One guy’s brain was sucked right through his eye sockets, and another schmuck had his intestines yanked through his neck?”

“His neck?” Daren scoffed. “You mean his mouth…right?”

“Nope. His neck. Right where is Adam’s Apple should’ve been.” Edd motioned under his gas mask.

Daren frowned. “How the hell…”

“I have no idea. One of the weirdest things I’ve ever seen.”

Daren looked about the decrepit hall, the walls of cracked and chipped paint, the rusty air vents in the sagging ceiling. “We sure that thing is gone?”

“Yeah. That’s what the guys with the guns are for.” Edd moved closer to the corpse’s decayed face, its features were chiseled in fear.

“Don’t worry about it. They secured the area before we got here.” Edd finally stood up, bending the twisting the kinks out of his back. “Besides, that thing knows better than to attack us. It’s all part of the deal.”

Daren glanced at the corpse and shook his head at the fact that the woman’s death would not be investigated because it was part of this Deal. A deal that no one at his level, even Edd for all his nonchalant talk, knew the specifics of.

When he joined The Organization, he knew that as a human without any powers, he’d have to start from the bottom up. Looking at the twisted body before him, he wondered if it was all worth it. He sure wasn’t paid enough to deal with these types of things, and snooping around as he was doing could surely get him killed.

But he had to uncover what this Deal was. Why would the Organization, who fought against demons and fallen Angels, strike a deal with a creature that allowed it to take victims without consequence? What were they getting out of it?

He planned to work his way up until he found the answer.

“Come on, get your mask on, man.” Edd clapped a hand on his shoulder. “We got work to do.”

Daren winced at the twisted body, then took up his gas mask from the floor. He’d find out the identity of of this poor woman, find out why she was killed, and hopefully, that would lead him to the cause of his sister Jillian’s disappearance. 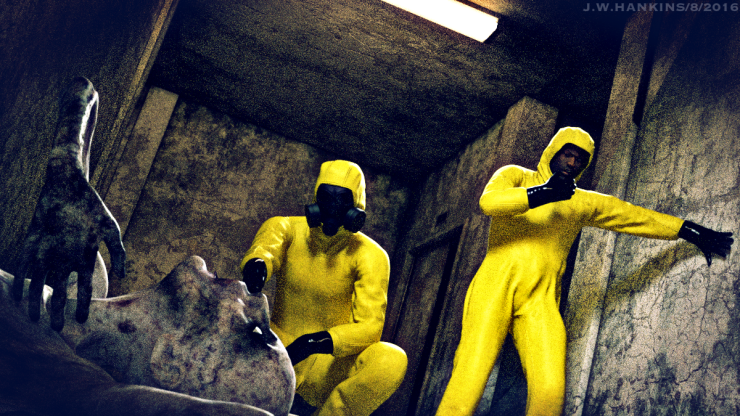